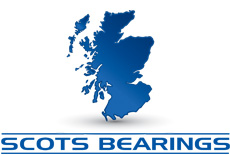 A world of
bearings & power
transmission at
your fingertips

Scots Bearings Ltd, Scotland’s largest independent supplier of bearing and power transmission products are delighted to introduce the new FAG-SNS plummer block housing from Schaeffler that increases the operating life of the fitted spherical roller bearing by up to 50%, compared to conventional plummer block housings. This is made possible by the new housing design, which ensures optimum load distribution in the bearing. Further design optimizations facilitate mounting and dismounting, improve condition monitoring and operation, and thus allow the housing and bearing to be used in a particularly flexible and cost-effective manner while significantly reducing the lifecycle costs. The new FAG plummer block housing can also be installed as a 1-to-1 replacement for numerous conventional housings.

The newly-developed and patented design of the FAG SNS plummer block housing distributes the bearing load, which is transferred by the rolling elements to the housing support via the outer ring, over two symmetrically-arranged support surfaces. This makes a positive change to the load distribution in the bearing and means that the bearing is subjected to a smaller overall load. Other performance characteristics such as rupture loads are not negatively affected. The operating life of the bearing is thus increased by up to 50 percent, as the distribution of the individual rolling element loads has an essential influence on the fatigue life that the rolling bearings can achieve. The prerequisite for the optimized design was the analysis of the bearing and housing as a complete system. It was thus possible to take the influence of the housing design on the load in the bearing into consideration and to make the corresponding optimizations.

Numerous other details of the new housing design make lubrication, mounting, and condition monitoring much easier and thus contribute to a reduction of the lifecycle costs (total cost of ownership) in addition to significantly increasing the operating life. A lubrication bore with a long lubrication groove has been integrated into the inside of the upper section of the housing, so the bearings from different series that are installed in each bearing position can be optimally supplied with lubricant. The lower section of the housing still contains grease outlet bores that allow the removal of the used and superfluous grease when grease relubrication is carried out.

For further information on the products listed please contact your local Scots Bearings Branch who shall gladly organise a site visit to discuss in more detail.

We have branches located
throughout Scotland...

Scots Bearings Limited is a company registered in Scotland. Registration No SC299694.

If you are interested in becoming a new customer, please register here.
© Scots Bearings Ltd. All Rights Reserved. Website by Vizibility Design